Assets America® can facilitate and fund your Mergers and Acquisitions (M&A) transactions.  We work with our extensive network of financial and legal associates to cover all aspects of private M&A financing, with deal sizes starting at $20 million.  Our network of acquisition and mergers funding sources and advisors provides M&A finance, consulting, and support for M&A processes. In this article, we cover:

Video – Mergers and Acquisitions: The World’s Best Lecture in a Nutshell

The basic M&A definition is the combination of two separate companies.  In some cases, it’s a combination of equals, but it often involves an acquirer taking over a target company.  M&A encompasses many variations, including mergers, acquisitions, consolidations, reverse takeovers, and triangular mergers.  Many factors apply to M&A transactions, including friendly vs hostile transactions and public vs private deals. Often M&A transactions are efficient because the combined entity often sheds redundant employees and assets.  Other benefits include economies of scale, acquisition of new technologies, and improved market position.

Assets America® Can Secure Your Mergers and Acquisitions Funding

Contact Assets America® to finance your next M&A transaction.  We can provide fantastic M&A finance terms even when your funding source rejects your request.  We also work with a network of professionals to handle all the financial, legal and valuation issues surrounding M&A transactions.  Therefore, if you need top service, unparalleled professionalism and surety of execution, turn to Assets America®.  Call us today at (206) 622-3000 for M&A deal structuring and a deep source of M&A finance, or simply fill out one of the below forms (Buyer or Seller Intake Questionnaire) for a prompt response!

A merger is the combination of two firms of approximately the same size, also known as a “merger of equals”.  Sometimes, one of the existing companies continues to exist as a combination of both merger partners.  In a consolidation merger, the partners form a new company, and the previous companies cease to exist.  The M&A transaction usually involves the surrender of each company’s stock and replacing it with shares of the new company.  Mergers are always friendly, and they typically include the support of both companies’ directors.

In a reverse triangular merger, also called a backflip takeover, the subsidiary merges into the target company.  In this M&A transaction, taxes are assessed as if the target’s stockholders sold their shares to the acquirer.

In a friendly takeover, the acquirer and target agree to terms of the M&A combination, including the purchase price and the method payment. For example, payment methods include cash, debt or shares.  The directors, employees and shareholders support the deal in the belief that it advances their interests.  On the contrary, an acquirer attempts a hostile takeover over the objections of the target company’s board of directors.  The bidder tenders an offer to purchase the target composed of cash, stock or some combination thereof.  The bidder might also engage in a proxy fight to take control of the target’s board.  The target might look for a bid from another company, called a white knight, and/or adopt one or more “poison-pill” provisions to make the hostile takeover costlier to the bidder.  A corporation’s board of directors uses the poison-pill defensive tactic in hopes of preventing a takeover.

Types of Mergers and Acquisition Transactions

Assets America can complete all sorts of M&A transactions, including the following:

What characterizes mergers is the relationship between the two merging companies.  For example, these include:

The two basic outcomes are:

In this type of merger, the target and acquirer deal through an independent third party.  This ensures that neither the target nor the acquirer can influence each other directly.  An arm’s length merger helps to quell controversies, such as the valuation of the target company.

In a strategic merger, the acquirer makes a long-term commitment to create synergies with the target company.  These synergies include broadening the customer base, increasing market share, and strengthening the overall business.  The acquirer might be willing to pay a premium for the target if it envisions synergies arising from this M&A transaction.

In an acqui-hire M&A transaction, the acquirer is more interested in the target’s employee talent pool than in the target’s product lines.  For example, this type of Mergers and Acquisitions deal is popular in the technology sector where expertise is at a premium.

There are numerous ways to finance an M&A transaction. Assets America® will help to secure the very best marketplace financing terms for your deal:

In an all-cash M&A transaction, the acquirer pays for the target company with cash.  The cash may come from retained earnings, debt, or stock issuance.  Often, cash plays a role in acquisitions rather than mergers, as shareholders in the target company exit the picture when they tender their shares for cash.  Cash is considered the strongest form of financing because it has a fixed value.  However, it does trigger capital gains taxes for target shareholders.

The target shareholders accept shares of the target company, often with a cash sweetener, in return for their own shares.  This stock swap postpones capital gains taxes until the target shareholders eventually dispose of their acquirer shares.  The acquirer sends a signal when paying with stock rather than cash. The signal is that the acquirer considers its shares overvalued.  The reverse is true if it prefers to pay with cash.

The acquirer shares can come from two sources: 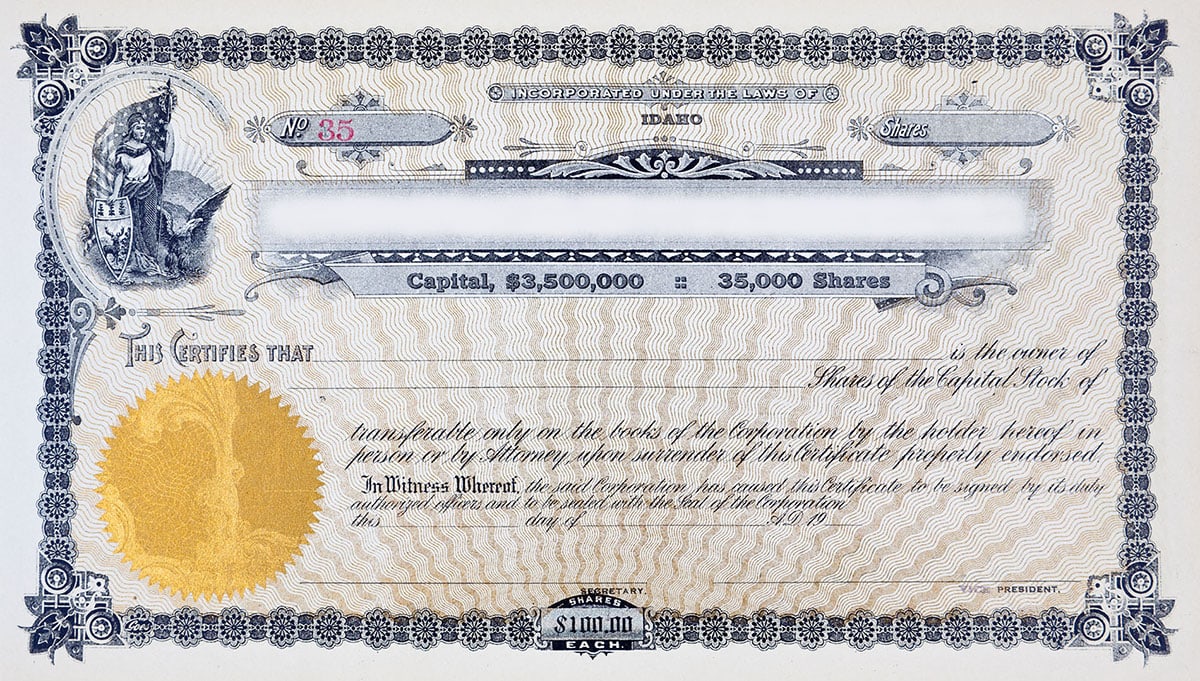 Mezzanine capital, typically preferred stock or subordinated debt, can also finance an M&A transaction.  Entities usually obtain mezzanine funding through a private placement.  This type of capital is more expensive because it is unsecured and ranks above only common stock in access to funds following default and bankruptcy.  The additional riskiness of mezzanine capital means that investors require a higher rate of return on it, thereby boosting its cost to the acquirer.

In a leveraged buyout (LBO), the acquirer uses a substantial amount of borrowed money to finance the proposed M&A transaction.  The assets of the target company serve as collateral to secure the acquirer’s debt.  This allows smaller companies to acquire larger, asset-rich targets.  LBOs are a popular way to take a public company private.  The company buys up the outstanding public shares and assigns them to one or more controlling shareholders.

In smaller M&A transactions, one way to lower the M&A cost is to secure the debt financing with the Small Business Administration’s 7(a) program.  This program guarantees up to 75% of M&A loans of up to $5 million.  Loan terms can run up to 10 years, and interest rates will cap at prime plus 2.75%.  Collateral is optional for SBA approval, but the lender may require it.  Borrowers that own at least 20% of the post M&A equity must personally guarantee the loan.  Typically, the lender requires a minimum post-transaction fixed charge coverage of 1.15x, which translates to an EBITDA (Earnings Before Interest, Taxes, Depreciation, and Amortization) cash flow of 3-4x the fixed charges.  However, some funding sources have more stringent requirements.  The SBA charges a loan fee of up to 3%, which cuts into the savings from the reduced interest rate.

Certain rules apply when using the SBA 7(a) program to guarantee debt for an M&A transaction. For example, these rules include:

Infographic – Mergers and Acquisitions: 5 Signs of a Healthy Merger 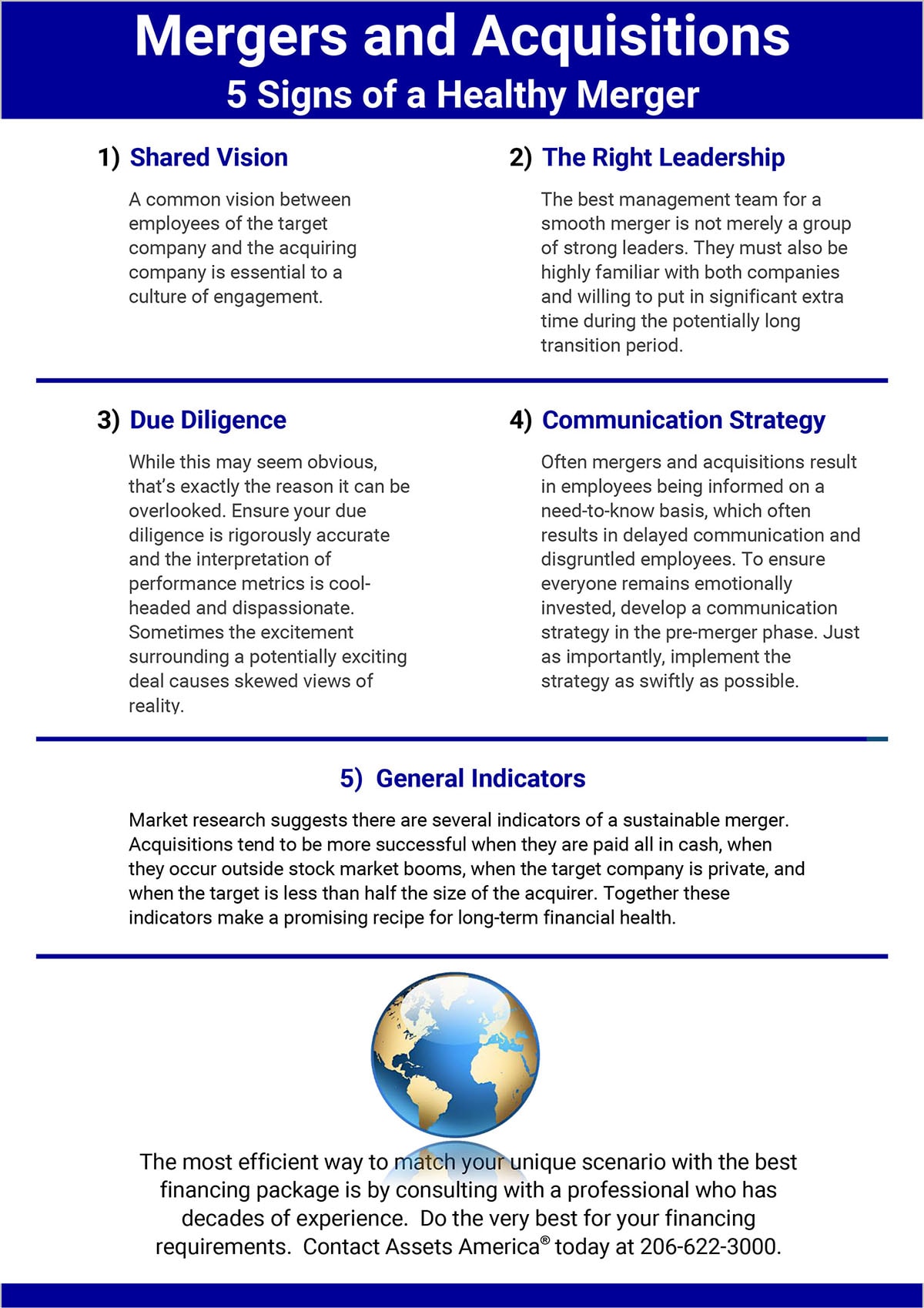 Online Resources for Mergers and Acquisitions