The site, with walking paths, parks and restaurants, consists of two mixed-use buildings, four and five stories.  The buildings surround a private drive, anchored by two 10-foot wide sidewalks lined with trees, seating areas and plantings.  The brilliant idea was to add amenities that made this once-deserted area instantly feel like an established neighborhood.  So, the developers included a communal kitchen, a bodega, a café, and a large fitness center with pool.  It even has an urban farm atop the parking garage.  And the mixed-use property is only a four-minute subway ride away from the Staten Island Ferry.

One of the hottest trends in successful mixed-use development is sustainability.  Residents and businesses are very interested in green projects.  This is especially true of projects that replace decrepit structures like abandoned factories and industrial warehouses.  Such is the case with the very successful VINE mixed-use development on the western edge of Hoboken.  VINE transformed the city’s frontier into a new neighborhood while emphasizing sustainability.  It won the Green Apple Award in 2015 and the MFE Award in 2017.

The mixed-use property is an 11-story, tiered building that shows off the brilliant Manhattan views across the water.  The unique façade consists of continuously altering window and brick patterns, helping to create many interior layouts.  Additionally, the building is certified LEED Gold for its many green ideas.  One such idea is a roof garden containing water-absorbing plantings and bamboo walls and floors. The property also boasts a power co-generation system for when the city power grid fails.  There is even an automated parking facility straight out of the Jetsons! 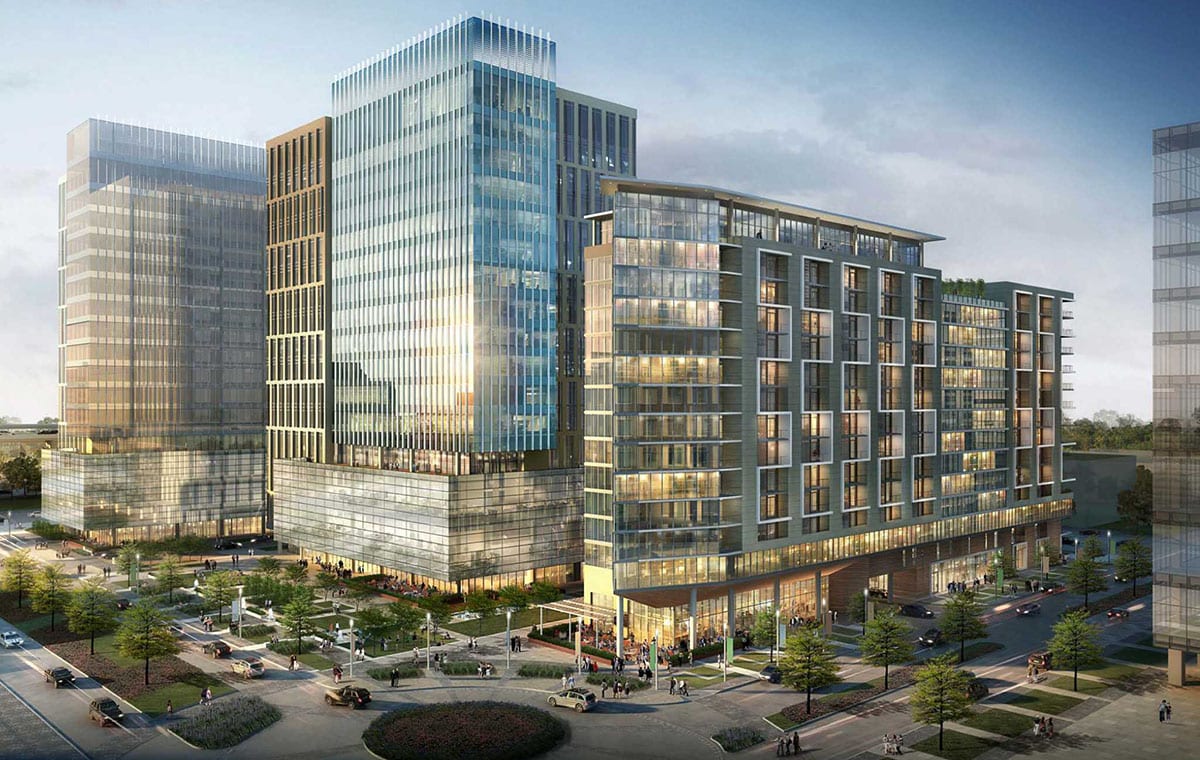 After that, the developers transformed the dormitories into 165 loft-style units using a handsome Colonial Revival design. They worked closely with citizens’ groups and the local government to respect the property’s heritage. Developers easily transformed the original design to a successful mixed-use development surrounded by two acres of green space, Liberty Greens. The space was once the inmates’ baseball diamond. The developers turned other prison spaces into a community center hosting movies, concerts and a farmer’s market. There is also a lounge, yoga studio, fitness center and outdoor pool. Plans call for 30,000 square feet of office space and 40,000 square feet of retail space.

Billionaire Bill Gates is teaming up with a Tampa developer to create the first WELL-certified community, Water Street Tampa. WELL is a wellness and health standard set by the International WELL Business Institute. The standard incorporates a smoking ban, air quality standards, reduction of volatile organic compounds, mold and microbe control and much more. This successful mixed-use development will encompass three phases, in which two towers will provide 3,500 rental and condominium units. The 21-story and 26-story towers connect to retail spaces and a car park.

Picture this: the 8th floor of a mixed-use development that contains a private 2-acre park. That’s just one fitness feature of the Oceanwide Plaza in Los Angeles, curated by celebrity trainer Harley Pasternak.  In addition, the mixed-use condominium project will include 166,000 SQFT of open-air retail, a Hyatt hotel, and more than 600 residences.

This mixed-use property will offer features from world-class gyms, as well as yoga rooms, fitness programs and nutritional education. The facility will also feature recovery tools for residents who’ve suffered medical setbacks. The aim is to provide opportunities for the residents to participate in wellness programs that enrich their luxurious lifestyles.

Urban residents take mixed-use development in stride, but many small communities have yet to experience it.  Indeed, developers have discovered that educational outreach is often necessary to prepare residents for mixed-use development. One success story hails from Norman, Oklahoma. The city purchased a run down HUD-backed apartment building for $10. Developers are incorporating the building into a new, successful mixed-use development called East Village. It will contain 43 townhomes, 96 loft apartments and townhomes, and 9,000 s.f. of retail space. The property is only a mile from the University of Oklahoma. This ensures plenty of interest from college students who can walk or bike to school.

Educating the residents about mixed-use property is just the beginning.  Similarly, appraisers and lenders who are unfamiliar with mixed-use development also need education. For one thing, there are no comparables when you introduce the first mixed-use property in town.  Banks need to understand the unique features of successful mixed use development.  These include the risks of market acceptance, construction difficulties, multiple absorption patterns and project phase timing.  However, you must be realistic when considering whether the local population will accept the project.

In conclusion, as we approach the next decade, futurists predict several trends that will affect the success of the mixed-use development market. For example, these include: