Adaptive Reuse – A Nod do the Past, A Focus on the Future

What Is Adaptive Reuse?

Adaptive reuse is a process in which developers adapt existing buildings for completely new uses. They do this while keeping some of their historic features intact. It’s quite cool really, and it’s environmentally friendly.  Adaptive reuse encourages the use of existing structures rather than a teardown and/or construction from scratch.

To that end, developers endeavor to retain as much of the building’s structure as possible. This would include both the outer shell and interior materials. Indeed, the reused building doesn’t need to be historically significant. Any obsolete structure might be a suitable candidate for the adaptive reuse of industrial buildings.

Adaptive reuse of industrial buildings, building modernization, and historic preservation all share the notion of extending life. That is, extending the life of an existing structure, rather than tearing it down and replacing it. Importantly, all three processes fight urban sprawl and reduce the environmental impact of construction.

For example, you might modernize an office building by adding active and passive solar systems. You might further install fire protection systems, and rewire the building for the latest technology. You could also replace the elevators and install new HVAC systems and so forth.

When finished, the modernized building has most of the features of new construction for only a fraction of the cost of building from scratch.

Unlike the adaptive reuse of industrial buildings, which creates something completely new by reusing old structures, historic preservation has a different goal. Specifically, it is a process in which sponsors attempt to protect, conserve and preserve buildings that have historical significance.

For example, in the U.S., many historic buildings evade the wrecker’s ball by joining the National Register of Historic Places. Consequently, this designates the building as a national historic landmark. Furthermore, a historic district is a group of buildings that are historically significant.

Indeed, you cannot modify a national landmark building without permission from the U.S Department of the Interior. Of course, historic preservation experts can restore a rundown landmark to its former glory.  They do this using period-appropriate materials or, if needed, replicas. Full restoration can be quite expensive, due to the use of period practices and materials.

Sustainability and the Adaptive Reuse of Industrial Buildings

To be precise, sustainability is a characteristic of development that doesn’t sacrifice the ability of future generations to meet their own challenges. It includes ideals like a small carbon footprint. It also reuses and recycles existing materials, and the use of materials that you’ll replenish with a minimal environmental impact.

Specifically, the benefits of adaptive reuse of industrial buildings include:

When speaking about the adaptive reuse of industrial buildings, you might say that what was old becomes new again. To illustrate, the following adaptive reuse projects are case studies that showcase brilliant examples of adaptive reuse architecture and design.

Impressively, this magnificent neo-classical five-story building was once the home of the state’s oldest fire department.  Moreover, it features four huge doors that once allowed entry and exit of fire trucks. In 2013, the fire department moved out and the Aparium Hotel Group started an adaptive reuse project. As a result, the adapted building became a 100-room boutique hotel with plenty of original firehouse features.

With impressive zeal, the sponsors of this 2013 adaptive reuse project started with an old, Art-Deco-style electrical power plant.  When they finished, they had a beautiful, downtown multi-use complex. It features a hotel, library, residential spaces, offices, retail shops, and restaurants. In this manner, the dormant electrical plant was the basis for this winning exercise in sustainability and reinvention.

Providence Iron and Steel Company operated for a century on the Woonasquatucket River in the city’s Industrial Valley.  After closing in 2001, sponsors adapted the site into an artist’s community. That is, it reused the metal and brick buildings to create a place where local artists create urban “art.” Specifically, we mean fences, trash cans, bike racks and all sorts of items that grace the downtown of Providence. In addition, the site also hosts art classes and other community events.

For decades, Wonder Bread has been the iconic white bread favored by kids of all ages.  Unfortunately, the factory closed its doors in the early 1980s after 80 years of daily baking. The land and structure remained dormant for 20 years. Then, a developer joined the movement for the adaptive reuse of industrial buildings by converting the bakery into offices. As a result, the area gained a loft-style, four-story office building that retains the bakery’s original signage and style. 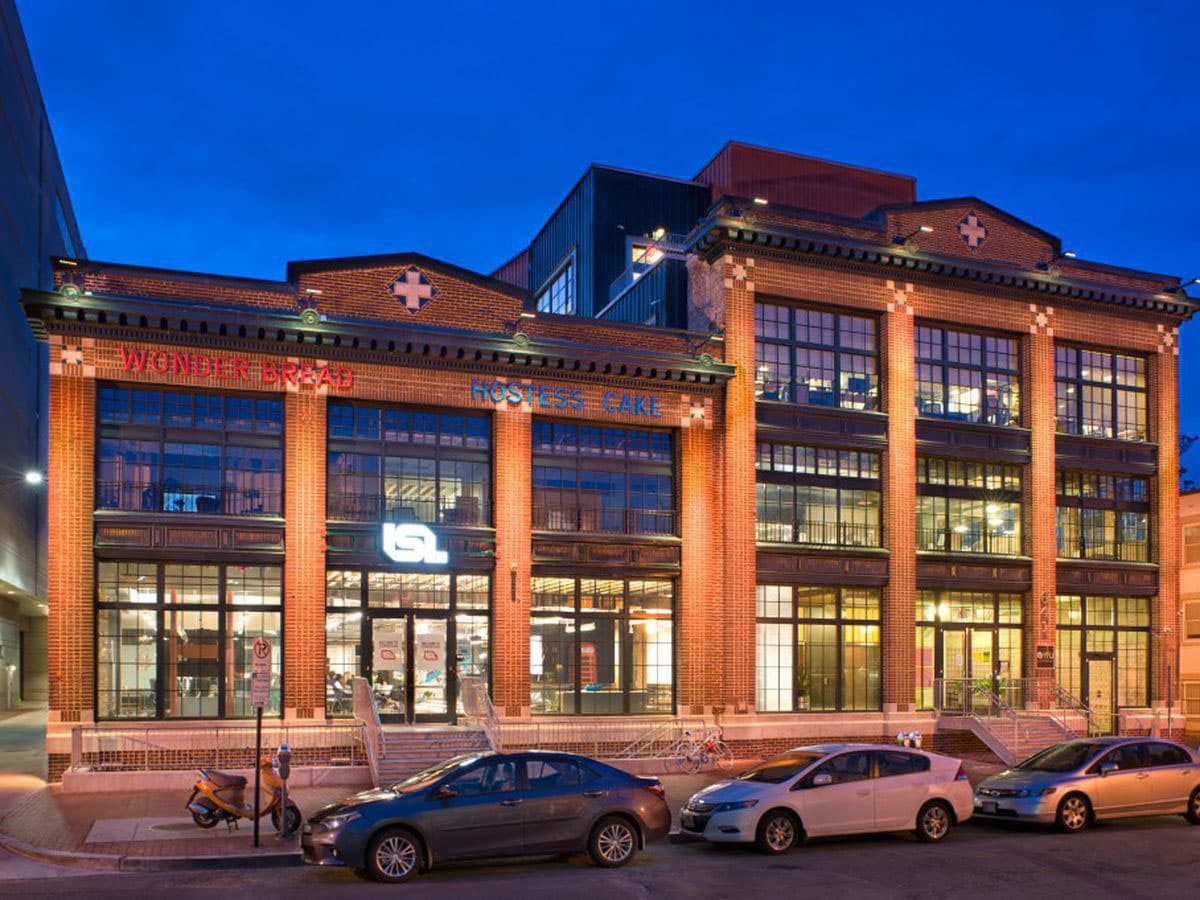 Historically, these 19th-century industrial buildings in Atlanta were originally built to make cotton fabric.  During World War II, it manufactured mortars and ammunition.  But today, the 10-acre site is an arts center featuring artists studios, an education center, a café, exhibition halls and an organic farm (with goats).

This radical example of adaptive reuse architecture transformed a 115-year-old dry goods store into a mixed-use commercial building.  The 2008 conversion was the work of the (fer) studio architecture firm.  Skillfully, it adapted the site to become a 10,175 square foot building with a conference room, offices, an event venue, and a gallery.

On the north shore of Seattle’s Lake Union sits the Seattle Gas Works Park. As you might guess, this was the site of a gasification plant that operated between 1906 and 1956.  Finally, the city purchased the plant in 1962 and hired a local architect to adapt it. In 1975, the public park was completed. To its credit, the city was careful to reuse some of the plant’s ruins. This included the kid’s play barn in the former compressor building.

Without a doubt, Assets America® is a strong proponent of sustainability projects such as adaptive reuse of industrial buildings.  If you need financing of $5 million or more, contact us for a construction or bridge loan for your adaptive reuse projects.

We can also arrange medium-term and long-term financing after the project is complete. Contact us for professional service and competitive rates at 206-622-3000.